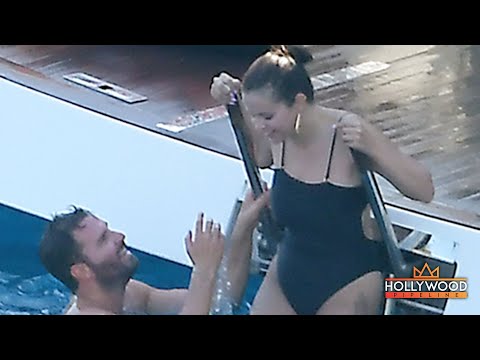 By bisouPosted in MasqueradePosted on December 12, 2022No Comments on Selena Gomez & Andrea Iervolino spark dating rumors in Italy
0
(0)

Selena Gomez, 30, and Andrea Iervolino, 34, spark dating rumors while vacationing with friends in Italy. The actress and the Italian producer were spotted as they celebrated her 30th birthday aboard a yacht. She wore a black one-piece with gold hoop earrings and appeared on top of the world as she enjoyed various water activities. She was seen jumping into the ocean, taking a jet ski ride with a friend and Ievorlino, as well as hanging out with him while sunbathing.

Gomez and Iervolino have been friends since 2019 and have taken vacations in the past but they appear to have taken their friendship to the next level seeming closer than ever on this trip. They appeared cozy with each other as he coaxed the singer to jump into the water and into his arms, sunbathing alone, and dining al fresco.

Selena is celebrating more than just her birthday since it has been announced she will be producing the remake of the 1980s classic “Working Girl”, according to Deadline.

“Sources tell Deadline that the studio is developing a reboot of the 1980s classic Working Girl, with Selena Gomez in final negotiations to produce. Ilana Pena is adapting the script, and the film would likely premiere on Hulu.” It’s unclear if she will just be producing the film or also starring in it but it adds to her impressive roaster as a producer which includes the award-winning “Only Murders in the Building” with Steve Martin and Martin Short.